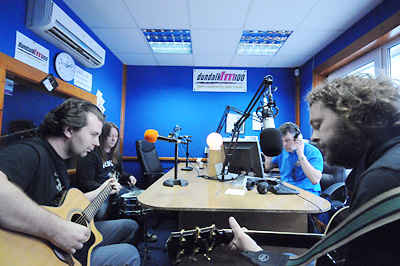 lifeonland took a short trip up to Dundalk FM today to perform special acoustic renditions of 'Blind' and 'Seige'. Thanks to Michael Duffy for having us on the 'Feelgood Factor' and also to John McCabe for showing us around the town and taking a few snaps of the band in action. We hope to be back up in Dundalk in the coming months! 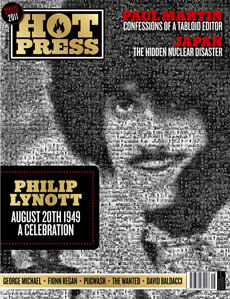 lifeonland's three-track debut showcases a band with an energetic sound that has sparkling psychedelic overtones and who grow even more endearing with repeated plays. 'Seige' has swarthy vocals to the fore and evokes memories of 'Silver Machine' by Hawkwind, The Byrds' 'Eight Miles High' and the better aspects of Ocean Colour Scene. The melody on 'Regrets and Chances' really soars, with hints of Jim Morrison in a truly fine vocal performance. 'Blind' takes a more world-weary approach and applies it to a similar musical blueprint.

Tracks from 'Pick of the Fortnight' will be featured on the following shows in the coming weeks (Click on links to shows):

After much debate and opinion expressed across the pages of Facebook, we have finally got the definitive name for the band. And the winning name is... lifeonland! Well, thank the stars for that. Actually, thanks to everyone for their ridicule, hurled abuse and occassional useful suggestions!

Just for the record, that is all one word and lower-case. We don't want to be getting confused with a certain series of nature documentaries by David Attenborough!

Like a lot of bands, we can't agree on the colour of shite.

We formed haphazard-style in the middle of 2008 as a favour to a mutual friend (Shane Haughney) and re-ignite the embers of 'Octopuss Underground' from the early nineties. Mark (vocals and guitar) and Eoin (bass) were joined by Declan (drums) to play a few songs at Shane and Ann-Marie's wedding in January 2009.

Having spent the long Winter rehearsing a few numbers in the back shed of 'Trip Hazard', we enjoyed the feel of it all again. After the wedding, we continued to play music and started writing a few of our own tunes. In June 2011, we finally decided to record some of these songs at the Orion Studios in County Wicklow.

The only problem now is that the three of us can't agree on the one name for the band! We hope to get this resolved over the next week when hopefully some nice radio show might help us out ;-)

Our shortlist of potential names are...

Once we can get one of these names chosen, then we can finally start getting things on the move - getting some proper artwork together, getting some press coverage and playing a few gigs!

You can hear some sample tracks by the band on